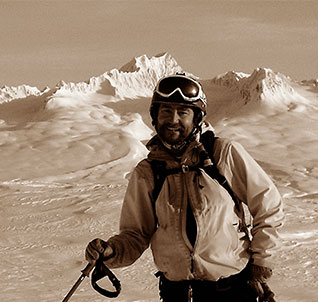 Dave Johnson, aka “Gomez”, hails from the topographically challenged but ski fanatical state of Connecticut. At the age of 18, he moved west to the Rockies where he graduated from the University of Colorado-Boulder. Since 1996 Bozeman, Montana’s Bridger Bowl is his North American winter base while splitting time between hemispheres. Dave began guiding in the adventure travel industry in 1995, running active vacations throughout the Americas in order to support his rabid travel habits and ski addiction. Dave started with CASA in 2002, purchased the business in 2007, and has led all the trips CASA offers. Dave’s on-mountain skills include: American Avalanche Association Levels I & II Cert, 16 years EMT certification, 6 years Big Sky ski patrol, and 5 years guiding/instructing at Moonlight Basin. In 2013 Dave traveled to Hokkaido, Japan to build future CASA adventures in the land of the rising sun.

Back to Staff Page