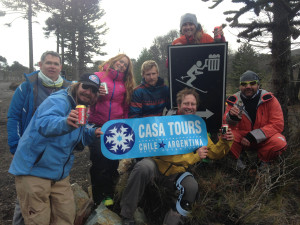 July 31 – August 2: Our first group of the South American winter arrived on July 31st, 2013.  We headed up to the Tres Valles region and rallied around the groomers of La Parva & Valle Nevado.  Off-piste was coral reef conditions and still relatively boney.  None the less it was good to get the ski legs back underus and La Parva is one of the best resorts in Chile for fun long cruising action.

August 3rd- A storm began to move in and we were on the road to Nevados de Chillan to catch it!!!!

August 4th -This Pacific front unleashed, and the entire afternoon and evening it stormed hard.  Although almost all the lifts were shut down this did not deter us from hiking a ways up the mountain for fresh inbounds tracks.  Guests were absolutely plastered in Andean POW!!!!
August 5th the skies broke open and we were treated to a 5 star bluebird pow-tastic day at Nevados.  Elephante was prime, however a German snowboarder who poached our line found out about lurking hazards below and fell into a deep hole.  Fortunately he was not injured and received some serious instant karma.  Lower Pirigallo was also super rica with styrofoamy, dry Andean snow.  Again there are still serious terrain hazards in the exit gullies so all riders should be aware of these.

August 6th 2013 The storm settled back in for its heaviest event.  Most everything was shut down and again we hiked our ways up the resort to earn our fresh turns for the day.  That evening it really unloaded and the base area received 45 inches by morning.

August 7th  2013 Still dumping!!!! From the High Andes of Ski Arpa & Portillo to the southern volcano region of Chillan & Pucon, Chile and the Andes were getting pounded!!! Roads were closed, few lifts were turning but the snow was accumulating rapidly and building a much needed base throughout South America.

August 8th: Our group headed north to Ski Arpa.  We were supposed to ski at Portillo but I knew the road would be closed so called my good friends at Ski Arpa to fit us in.  You can never count on the Chilean road crews to get roads open quickly, but the boys at Arpa worked hard through the night with their bobcat to get the road  open for us this morning.  Quite a feat if you’ve ever been here and you know what a wild road it is.  When we arrived there were only 3 tracks on all of the terrain.  Visibility came and went but the afternoon turned out to be spectacular.  We got 5 snow-tastic runs in Sachacorcho & Cocina.

August 9th: We saved the best for last!!!! Today was one of those days in the Andes that you cherish forever.  Totally bluebird, pow everywhere, and minimal wind.  Visiting Arpa on a day like today is a gift.  One can see the highest peak in the Americas, Aconcagua, to the east in Argentina, and to the west the Pacific coast horizon line, thus enabling you to see across the entire country of Chile.  The Arpa lads continued to open more terrain and we were the first group to take the cat up into Tony’s Bowl.  Lower Ratonera was EPIC!!!!!!!

These were some of the best days I’ve had in South America.  I arrived to Nevados late on the night of the 11th.  It had been snowing hard the last couple of days and I knew the weather was going to break on Monday morning the 12th.  Our timing was impeccable as we rolled up to the Nono lift just as it starting spinning.  The midway bowls under the Don Otto were completely untracked with velvety smooth Andean pow.  By the time we got this first lap in the Otto opened and we cycled Pirigallo laps all morning.  Then it was off to the Pirigallo fingers, super fun west facing spines with several fumerole features.  Knowing it was heating up I then skinned to the north face of the Pirigallo Valley (we are opposite down here in the Southern Hemisphere so the north faces receive the most sun)’ and tagged this 2000 foot face.  Back up the Otto and out to Valle Hermoso for a couple of ‘soulo’ laps of south facing dry powder.  The 13th was all about touring in Valle Niebla and Valle Hermoso.  When we arrived no tracks were in either valley other than the 2 runs I did the day before.  What a treat!!!!!  Back for more on the 14th and were blessed with 2 resident condors sailing above us on the Pyramid Peak.  We hit a great cycle of bluebird days and pow-tastic conditions!!!! 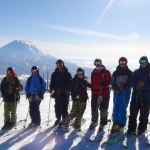 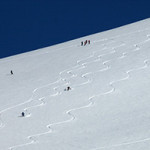 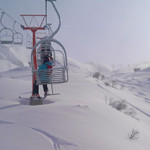 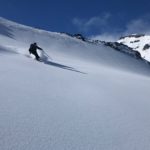 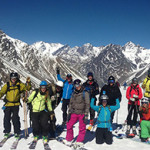